Common Mistakes: Should You Ever Admit Fault in a Car Accident?

The short answer to whether you should admit fault after a car accident is no. If you’ve been in a car accident, you should not admit fault. You may not be aware of all the factors that may have caused the wreck and an admission of fault may risk your right to compensation for the accident.

Auto accidents inflict pain, trauma, and expense on crash victims. They deserve compensation for their injuries and losses from the parties at fault.

However, determining who bears the fault for a car crash is not always clear-cut. Sometimes, accident victims themselves think their own actions may have played a role in causing a crash.

Those victims often wonder if they should admit that they bear some of the fault. After all, they know they should tell the truth, and they may truly believe they share some of the blame for an accident.

We understand that impulse, and agree it is always important to tell the truth. However, as lawyers for victims of car accidents, we also know that the best course of action is almost always not to admit any degree of fault before having first spoken with an experienced car accident attorney. Here’s why.

Broadly speaking, fault determines who has legal liability for a car accident. Lawyers, insurance companies, judges, and juries assign fault for a crash to individuals, companies, and others, as a way of determining who-pays-who for the costs of injuries, losses, and other damages.

When you admit fault, you may damage your case and miss your chance to be compensated for your injuries, medical bills, property damage, and pain and suffering through a personal injury lawsuit or settlement.

An investigation of the crash by police, your attorney, or other parties may reveal factors that you were not aware of at the time of the accident. It may show that the other driver drove through a stop sign or was distracted by a cell phone.

However, because you have already admitted fault, the other driver’s attorney or an insurance company may use that against you during a lawsuit or settlement negotiations.

In that sense, fault means something very different for lawyers, insurance adjusters, and others involved in the legal process than it does for ordinary people.

Often, we say “it’s my fault” as a way of being polite or deferential when something unpleasant happens. Or, we point blame at ourselves as an emotional response to an upsetting situation. In other words, for most of us, admitting fault is a social reflex, not a purposeful, knowing admission of a fact that has significant legal consequences.

What the Law Hears When You Admit Fault 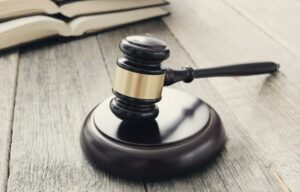 The disconnect between what the law means by “fault” and how most people use that word in everyday life, explains why you should never admit fault after an accident that left you or a loved one injured.

Imagine a car accident in which your car gets blindsided at an intersection. The impact leaves you dazed and shaken. Adrenaline courses through your body, making your hands shake and your heart race. Your friend in the passenger seat is bleeding from some nasty cuts. You feel overwhelmed, like you can’t catch your breath.

At that moment, a police officer comes up to you and asks what happened. Without thinking, you blurt out “It’s my fault! I should have seen that car coming!”

This might reflect what you actually believe. Or, it could show your tendency to blame yourself when bad things happen. Or, it might just express your heightened emotions. Or, it might constitute an unconscious attempt to garner sympathy in hopes of the officer telling you “no, no, it’s not your fault.” All of that would be totally normal.

However, that is not what the officer would necessarily hear. And, it is not how your words would appear on an official police report.

Instead, your spur-of-the-moment, emotionally-driven, probably-irrational moment of self-blame would transform into a legally-meaningful, permanent admission of guilt or fault. By saying it, you could end up limiting your right to receive compensation, and in the worst case, you could end up as the one facing liability for other people’s injuries.

The fact that what you said wasn’t accurate will not necessarily matter. Police, lawyers, and insurance will likely take your words at face-value, which could have serious legal and financial consequences for you.

Never Discuss Fault Until You Have Spoken With a Lawyer 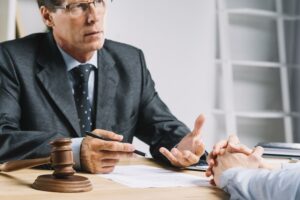 After a car accident, multiple people may ask you to tell them your version of events. It may happen at the scene of the accident in a conversation with law enforcement while they are gathering information for the accident report.

It may also happen in the days or weeks that follow when an insurance adjuster from your own, or someone else’s, insurance company calls to ask you about the crash for a recorded statement.
Your instinct in these interactions is to be as helpful and forthcoming as possible. You assume these people are friendly and sympathetic, that they will hear your words exactly as you intend them, and that they’ll understand that, of course, you didn’t actually cause the crash.

Your words have consequences and you need to choose them carefully. Your safest course of action is to avoid all conversations about the accident until you have spoken with an experienced car accident lawyer who can help you sort through your perceptions of fault.

If you cannot avoid an interaction (such as when a police officer questions you at the scene), then:

Admitting fault, even as a natural reaction to be polite, can make it easier for the other driver’s auto insurance company or attorney to paint you as the fault driver in the accident. It could damage your insurance claim, your car accident claim, and any personal injury claim if it’s decided that you are the fault driver.

After a car accident you should:

In your conversations with law enforcement, the other driver, and any other party you should not apologize, say “I’m sorry”, or say “It was my fault”.

If an insurance company representative calls you to give a statement, you should decline to speak with them until after you have retained an attorney. You are not obligated to agree to a recorded statement and should not discuss fault with the car insurance adjuster.

After a car accident, you should also exercise caution with what you post on social media. Making statements about the fault for your accident online may affect your case. 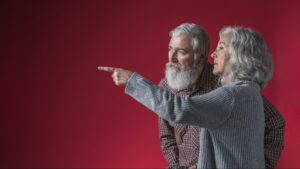 The other driver in a crash might try to point the finger at you. That can make things uncomfortable, and prompt some knee-jerk reactions.

Some people respond by fighting back and arguing. Others cave in and admit fault for something they did not do. Neither of those reactions, however, will help you.

Your best course of action is to avoid a discussion of fault altogether until you have an experienced personal injury lawyer advising you.

Your lawyer’s job is to gather the facts and prepare arguments to respond to any accusation of fault. That is what lawyers do, day-in, day-out. Trust a skilled legal professional to respond on your behalf, instead of potentially digging yourself into a hole you cannot escape.

What should you say if the other driver points a finger in your face and screams “It’s your fault!”? Say nothing, if possible. De-escalate. Walk away. Or, if you must, respond by saying “That’s not for you to decide.” Because, it’s not.

Police, lawyers, insurance companies, judges, and juries make the real calls on who has fault for an accident. The parties involved in the crash do not.

When to Speak to a Car Accident Lawyer

After any car accident, people with a legal and financial stake in the damage it caused want to know what happened, and they will want to speak with you, the crash victim. You cannot avoid all of these conversations, such as talking to the police.

However, you can monitor and limit what you say by following the suggestions above, and by speaking with an experienced car accident injury lawyer as soon as possible.

A lawyer represents you, and only you. The lawyer’s sworn job is to protect and promote your legal, personal, and financial interests by advocating on your behalf. The lawyer stands between you and insurance companies, law enforcement, and others, limiting their access to you until the lawyer has prepared you to answer their questions and you are ready to talk.

Being careful with your words when it comes to an admission of guilt and consulting with an experienced personal injury lawyer can be key to ensuring that you get much needed compensation for your medical expenses and the property damage that happened because of the accident.

The award-winning car accident lawyers at The Miley Legal Group have decades of experience advocating for clients who have been involved in car accidents. We know how to communicate and negotiate with insurance companies and defense lawyers to get the best outcome possible for our clients, and how to prepare our clients to talk about their accidents in ways that avoid legal problems and pitfalls.

With convenient locations in Morgantown and Clarksburg, we serve clients throughout West Virginia. Contact us today online or at (304)745-2636 for a free consultation to discuss the circumstances of your car accident and to learn how we can help crash victims avoid making costly mistakes.