Is it Better to Settle Your Personal Injury Claim Out of Court?

Is it better to settle out of court? The short answer is that it depends on the nature of your case. However, settling your claim with the help of an attorney instead of taking it to trial is faster, less stressful and cuts out the uncertainty that comes with leaving the decision to a jury.

If you’ve ever been injured as a result of the conduct of another person, you probably know that you can pursue a personal injury lawsuit to recover the value of the harm that was caused to you.

While that sounds fairly simple and straightforward, there are many questions you may want to have answered as you consider that option.

As personal injury lawyers, we have handled thousands of cases and, while each client is different and every case has its own unique set of facts, there are some questions that appear in virtually every case.

One such question that you may have is whether it is better to settle your injury claim ‘out of court’ or, whether you should go to court, have a trial, and let a judge and jury decide your case for you.

Below we answer your questions about the settlement process and discuss the advantages and disadvantages of an ‘out of court’ settlement for your case.

What Percentage of Cases Settle Out of Court?

As a general rule, it is unlikely you will have to go to court to recover for your personal injury claim.

Why? Because most cases settle long before going to trial and, in many cases, without even having to file a lawsuit.

It’s commonly cited that 95-96% of all civil cases settle out of the courtroom, but the real number may actually be slightly lower than that. Because settlements are private it’s very hard to get an accurate account of the number of cases that avoid their day in court, though many cases are settled after years of preparation for trial.

Although most cases settle rather than going to trial, you still need to be aware of the settlement process so that you will recognize a good settlement, and know when to refuse a settlement offer.

If you’ve been injured, you may be wondering what the next step is to get compensation. You may have heard of cases being settled out of court but aren’t sure what happens in a settlement. Let’s break down what a settlement is, how it works, what it means to agree to one, and look into why so many cases are settled out of court.

What Is a “Settlement” And How Does It Work?

A “settlement” in a typical personal injury case is a voluntary agreement between you and one or more people that may be responsible for the harm that was caused to you.

In most of these cases, out-of-court settlement negotiations occur when you (or your lawyer) make a formal request upon the opposing party to pay fair and complete value for the injuries you suffered.

This is often called a ‘demand.’ In exchange, the opposing party (or their lawyer) will respond to your request by either denying responsibility for your injuries or responding with an ‘offer’ to settle the case.

This negotiation process may go back and forth between opposing sides several times before a settlement is reached.

If you reach a settlement out of court, the details of the settlement should always be set forth in a written document outlining the terms of the agreement. The most significant language in the settlement document will explain that, in exchange for receiving payment money, you agree to “release” the other party from any and all past and future liability arising from the incident that caused you harm.

Since you will be the person receiving payment for your injuries, you will be expected to sign the settlement agreement promising to ‘release’ the person who injured you.

This means that you will voluntarily dismiss the lawsuit (if one has been filed) or, if a lawsuit has not yet been filed, you agree to never file a lawsuit in the future for the incident.

Since you will be FOREVER barred from coming back and receiving any more money from the person that caused your injuries, you need to make certain that you have carefully considered the full extent of your injuries before signing away your rights.

Why Do So Many Court Cases Settle Out of Court?

Settlements save both parties the effort, expense, and uncertainty of going to trial. They make sense as an efficient resolution to a lawsuit, if the parties can find a financial middle ground.

When Should a Settlement Negotiations Begin in a Legal Case?

Settlement negotiations in personal injury claims should never begin until you have determined the full extent of the injuries that you’ve experienced and how your life has been affected. Only at that point will you be able to calculate the value of the harm caused to you.

In other words, you should never begin discussing or negotiating a settlement of your personal injury case while you are still treating for, or recovering from, your injuries.

One of those scenarios will allow you to return to a normal life, while the other may cause you a lifetime of pain and suffering. The value of those two circumstances is drastically different.

Obviously, you want to make sure you know what your future holds before you begin to discuss settlement.

Should I Accept the First Settlement Offer?

One of the most common questions we get asked by clients is whether they should accept the first settlement offer made by the insurance company for the opposing party.

In every instance that we are asked that question, the client is given the same response: NO.

We’ve handled thousands of personal injury cases and have never seen an insurance company or individual begin settlement negotiations with their highest and best offer.

Typically, both parties to a lawsuit will begin the settlement negotiations with demands and offers at a certain predetermined dollar amount, as well as a desired settlement range. The key to any out-of-court settlement is not where the negotiations begin, it’s where they end.

How Do You Respond to a Low Settlement Offer?

There are several different ways you can respond to a low settlement offer. If you started the negotiations and the offer from the opposing party is so low as to be offensive, you can choose to end the negotiations, walk away and begin preparations to file a lawsuit and go to court.

That action will either ‘call the bluff’ of the opposing party (at which time they will increase their offer) or, it won’t, which will tell you that you should plan to go to court and not waste any further time trying to negotiate a settlement which was never likely to happen.

If the opposing party started the negotiations with a low offer, you can choose not to respond to such a low offer and wait for it to be increased or, you can respond with a settlement ‘demand’ at a level considerably higher than where you hope to settle the case and see if the opposing side makes an upward move.

If the opposing party makes an initial offer that is low and unacceptable to you, but which makes you believe they are interested in trying to find reasonable compromise, you can respond with a ‘demand’ that causes them to believe you are willing to be reasonable in your negotiations.

Hopefully, negotiating in this manner will cause both sides to continue negotiating and reach an outcome that may be less than desirable but one that is acceptable to both sides.

What Makes A Good Settlement Offer? 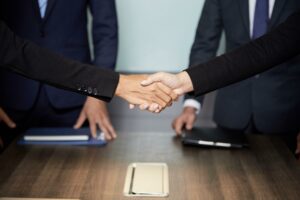 Judging the quality of a settlement offer is not an easy task. However, a good and fair settlement agreement is one in which you believe pays you a fair value for the injuries you suffered and the impact it has had on your life and that of your family.

While that doesn’t necessarily mean that you were paid the highest possible value for your injuries, it does mean that you received an amount that fairly recognizes the harm you experienced, while also considering the risk that if you went to court a jury may have determined that your injuries were of less value.

Skilled lawyers will often tell you that a “good” settlement is one in which neither party feels fully satisfied; that is, both parties feel like they compromised their desired outcome to get a deal done.

Who Decides Whether to Settle or Go to Trial?

It’s always your choice, as the client, whether to settle your personal injury claim.

When it comes to settlements, our role as your attorney is to provide you with a clear, current, and accurate evaluation of the strengths and weaknesses of your case, and to advise you on whether a settlement matches that evaluation and your personal priorities.

How “Fault” Factors into Settlements.

Whether it’s a car accident, medical malpractice, or something else,“fault” plays a major role in all personal injury claims.

In some cases, the defendant is 100 percent at-fault for the event that led to injuries. Yet, oftentimes, the injured party played some role in causing the accident.

The advantages of setting out of court include:

The disadvantages of settling out of court include:

Now let’s look at the same question from the opposite perspective: here are some potential pros and cons of taking a personal injury claim to trial, instead of settling:

Potential Pros of Taking Your Personal Injury Case to Trial

Potential Cons of Taking Your Personal Injury Case to Trial

When Doesn’t It Make Sense to Settle?

Sometimes settlement simply is not an option. The plaintiff might need a trial as a way to seek justice and closure for the harm they suffered. Other times one or both parties do not come to the negotiating table with realistic bargaining positions, or have wildly differing assessments of the strengths and weaknesses of a claim.

In those situations, it may not make sense to settle (although it virtually always makes sense to try).

Skilled lawyers will also sometimes advise their client that although settlement makes sense overall, it is not yet the “right time” in the case to settle.

In other words, for strategic reasons, a lawyer might feel that settlement negotiations will achieve a better outcome at some other moment, such as after important evidence comes to light, or at a point in the calendar year when settling would serve the defendant’s business interests.

Questions for Your Attorney

Always consult with an experienced personal injury attorney about any personal injury claim. Asking the following questions may give you more information about making the right choice between settling and going to trial:

If you’ve been injured and are seeking compensation, you need a law firm with a proven track record both in the courtroom and at the negotiation table by your side to ensure you get the settlement you deserve and to defend your case in court if necessary.