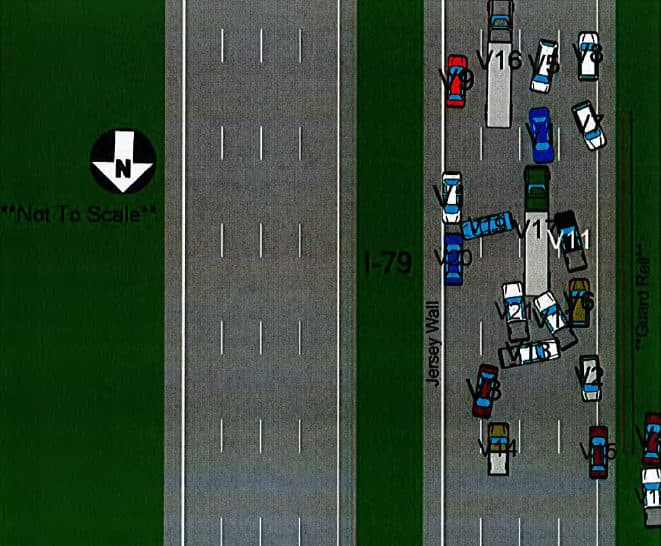 Who is at Fault in a Multi-vehicle Accident?

It is common to hear about multi-car pileups in the news, the most recent in our region being a 58-vehicle pileup on Interstate 68. The increased number of vehicles on the road and with phones and other things that distract drivers, vehicle pileups are more likely to occur. Throw highway speeds and a bit of bad weather or dense fog, and it is almost guaranteed a pileup will happen on that stretch of highway.

But who is responsible for the accident?  Whose insurance company is going to foot the bill? Will everyone hold some responsibility? This is where it gets complicated.  After all, the wreckage is cleared, and those that are injured are treated; the priority becomes determining the cause.

Once the seriously injured are taken from the scene and as the wreckage is removed by tow trucks, the responding law enforcement agency begins to take notes, interview witnesses and hopefully snap some pictures or grab some video. Reconstruction of the accident starts with the investigation and generally ends with a police report. After the fact, insurance companies will begin their investigation as well.

Why discovering started the multi-vehicle chain reaction is important.

In West Virginia, determining who started the chain reaction will be based on the information gathered in the police reports. Some multi-car pileups have a few drivers that share some of the responsibility and some of the blame. But how does that translate to insurance claims, and who is going to pay for the damages? Law enforcement compiles all of the information into one comprehensive report that is then reviewed by the interested parties. It is not uncommon for the responding officer to not officially declare one driver to be at fault, especially if the weather was a factor in the accident.

Besides dealing with insurance companies determining they will not pay the claim, some drivers in multi-car pileups also face limited insurance coverage. If you are in an accident where one person is deemed at fault, but they only have a low amount of coverage, your claim may not be paid in full. Say, for example, the at-fault driver only has $25,000/$50,000 coverage, but there are 15 cars involved in the accident that include four significant injuries. The $50,000 maximum per accident is not going to cover anything at all. This is when your UIM/UM coverage comes into play. If there is not enough insurance to go around and cover everyone involved, having decent insurance yourself will be critical.

Hiring a car accident attorney if you are involved in a multi-vehicle pileup is essential. Everyone knows that it is hard enough to get fairly compensated for injuries when we know precisely who was at fault, let alone in a situation where it is up in the air, or the blame lies with multiple people.