Running has gained great popularity in recent years as a way to stay or get physically fit and as a way to keep some level of competition in the lives of racers.  In fact in 1990, the number of road race finishers, those that ran 5Ks, etc… across the country was less than 5,000,000, ballooning to just over 17,000,000 in the most recent data released.  Not only has this been seen as a boon for the running industry, but more and more races have been put together to raise funds for various groups across our state and the nation, including the Test the Watters Trail Run organized by Michael Malfregeot.  The Test the Watters Trail Run was not created as a road race, but one that moves through the Watters Smith Memorial State south of Clarksburg.

Raising money for the United Way, the trail run is a first of its kind in Harrison County.  What comes along with any official run is hard work for not only the runners, but behind the scenes for the volunteers that make it possible.  From reviewing the trails, setting up the race forms, ordering shirts, to making sure everyone safely completes the run with no casualties.  Volunteers are an integral part of the process and the run itself would not exist without them, and the organization, this case the United Way, would not benefit from the funds raised through the race and its runners.  That is why Michael Malfregeot was selected as this months Celebrating Volunteer Award winner, not only just for his work with the Test the Watters Trail Run, but also his work with the United Way of Harrison County and the many other organizations that he is a part of within our community.

A large number of citizens within our community have benefited from the volunteer work of Michael Malfregeot.  He has volunteered hundreds of hours through the United Way, the Kiwanis Club of Clarksburg, Clarksburg Uptown and the Criss-Cross, Inc. among the many.  He also coaches boys’ and girls’ cross country at Notre Dame High School in Clarksburg and the t-ball team for his son.  All of this while teaching part time at Fairmont State and Pierpont Community and Technical College, and maintaining his important work as the Vice President, Retail/Small Business Development Manager at Premier Bank.  Michael lives in Clarksburg with his wife and two children. 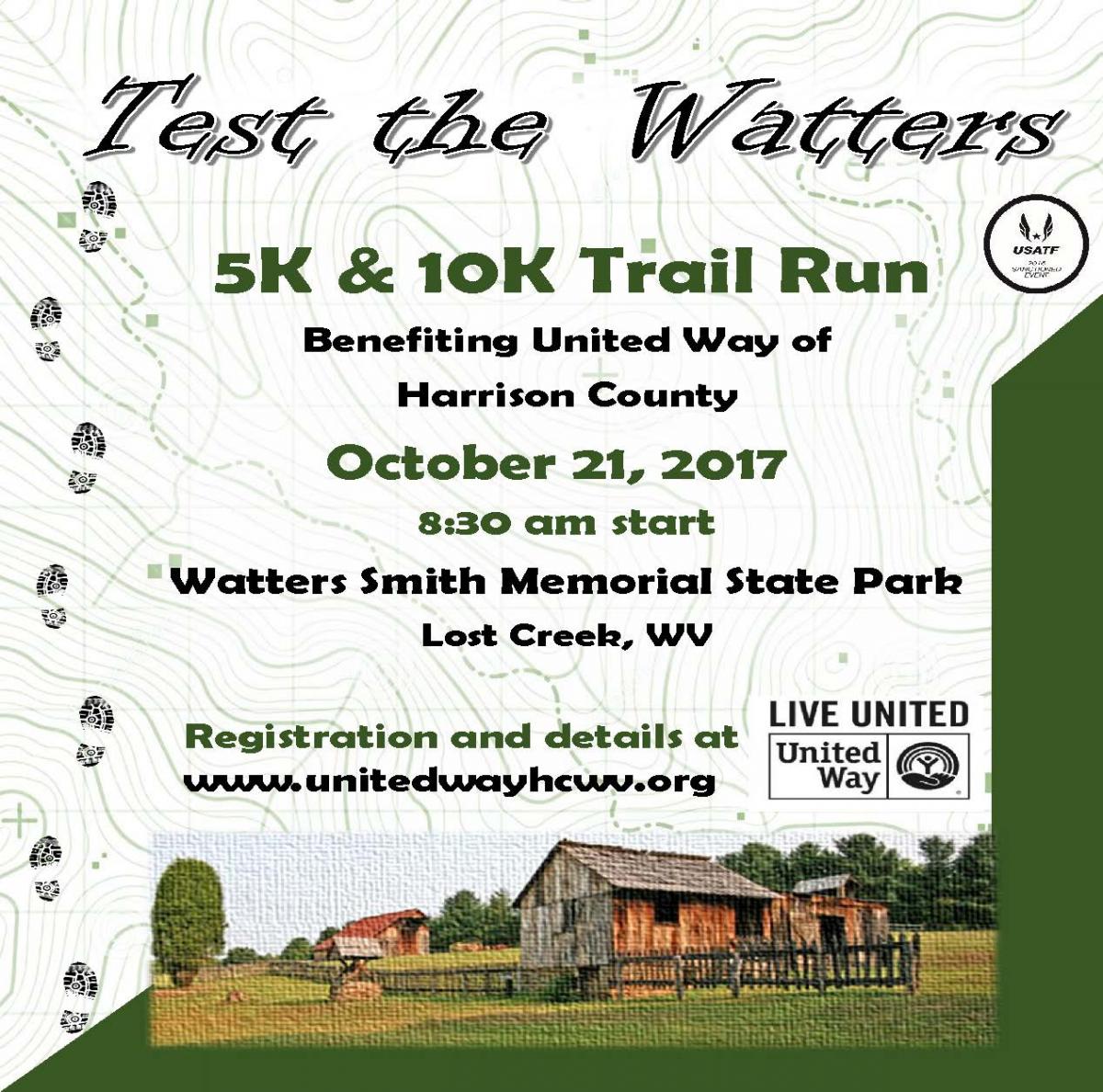 The Test the Watters 5K & 10K Trail Run will be held on October 21st this year with an 8:30 am start time.  The fee to enter the run are $30 for the 10K and $20 for the 5K.  (The price increases by $5.00 for both if you wait to register the day of.)  Online registration is available through unitedwayhcwv.org.  If you register by October 13th you will receive a long-sleeve cotton running shirt, no guarantees if you register beyond that date.

“Michael Malfregeot is a pillar to the Clarksburg community.  His dedication to the many groups and organizations that he is involved in is awe inspiring.  Between raising money for the United Way and gather hundreds of supplies for the flooding victims last year, Michael proves time and again how much he values his neighbors and their success.” Gretchen Ross of WBOY stated.  “Clarksburg and North Central West Virginia are all the better because Michael has dedicated a great portion of his life to serving others.”

“I have known Michael for many years and find myself inspired by all that he accomplished.  His hard work and dedication to himself, his family and his community should serve as a shining example for others,”  said Tim Miley, owner of The Miley Legal Group.  “I look forward to what he takes on next to make North Central West Virginia one of the best places to live in our state.”

The Celebrating Volunteers awardees receive public recognition for not only themselves, but their organization.  They also receive a $500 contribution to the organization they represent in their name.  Gretchen Ross of WBOY TV and Tim Miley of The Miley Legal Group work together to select the awardees from the many nominations received from the public.   The volunteer selected will have demonstrated their commitment to an organization through volunteerism and support.

“I am an avid supporter of volunteerism in our communities.”  Miley stated.  “The Celebrating Volunteers program is a way that we can recognize the hard work and dedication of individuals across our region.”