What Should You Do If The Other Driver Denies Responsibility? 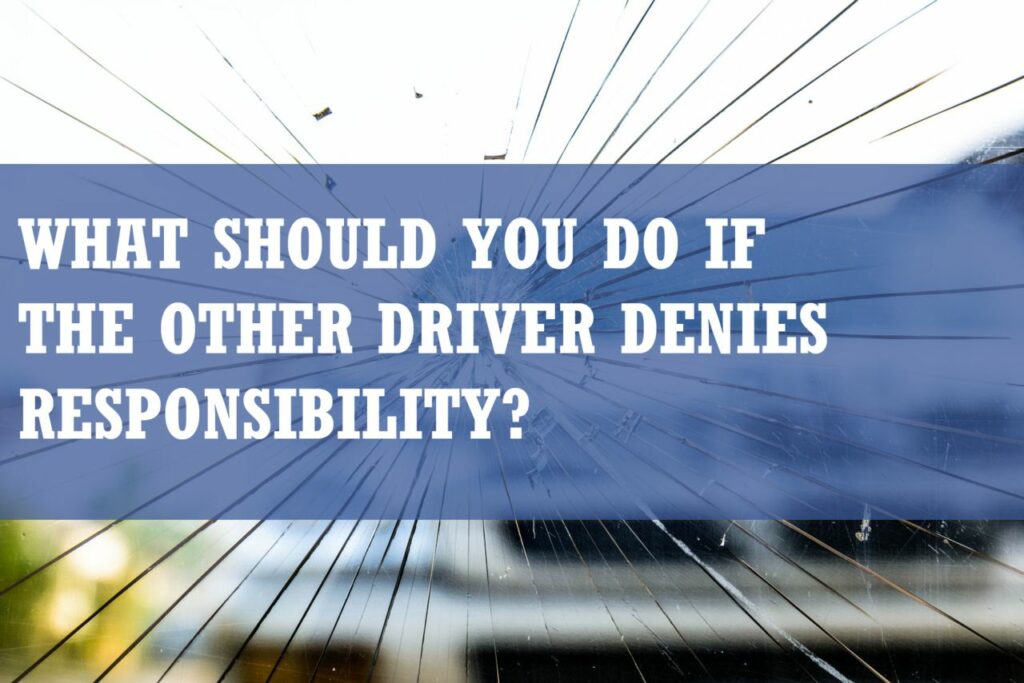 For those of us unfortunate to be involved in car wrecks, it is bad enough that we have to deal with the consequences of another driver failing to follow the safety rules of the road. It is easy to become frustrated dealing with the repairs to your vehicle and the injuries which may have been caused. This frustration is only compounded where the other driver refuses to accept responsibility for a crash that is clearly their fault.  This article is meant to offer some suggestions on what you should do if you find yourself involved in a wreck where the other driver denies responsibility. The following suggestions are designed to make it easier to handle such a situation for you or an attorney should you decide to hire one.

At the Scene of the Accident and Immediately Afterwards

Whether you are injured or not, call the police to report the crash.  This will document the fact that a crash occurred, who is at fault for the crash, and provide you with the other driver’s insurance information.  Sadly, if you do not call the police, there are times where the other driver will apologize to you at the scene and admit it is their fault, only to change their story later.  Having the issue of fault investigated and documented by the police makes it much less likely and a whole lot harder for the other driver to change their story and deny responsibility.

If the police are not called, you will lose your opportunity to have the circumstances and fault documented.  Once the insurance companies get involved, if there is no police report, it often will end up in a situation where it is your word versus the other driver’s.  Their insurance company will likely deny responsibility, which simply creates a whole new set of frustrations to deal with.

Even when the police are called, you must still be certain to make sure your version of events is detailed and made known to the officer.  If the officer does not ask you to provide a written statement it is often a good idea to write down your version as soon after a crash as is practical.  You cannot always count on the officer understanding your version or accurately taking down what happened.

If there are witnesses to the crash, try your best to get their names and contact information.  This is a necessity whether the police are called or not.  Contrary to popular belief, the reporting officer does not always obtain witness information and include it in the crash report he or she prepares. This is especially true when the officer does not think such information is necessary because, in his or her mind, the fault for the crash is clear. Do not always assume that the insurance company for the at-fault driver will see things, in the same manner, you and/or the reporting police officer do. If the witness information is not obtained at the scene of the crash it is often lost forever.

What is Important When Other Driver Denies Responsibility?

It is also important that if you speak to the driver or passengers in the other vehicle that you recall what is said. Statements by the parties at the scene of a crash are typically admissible in court. Again, if the reporting officer does not think to obtain statements from the people in the other vehicle then be sure to write down your recollection of what the other people said as soon after the crash as is practical.

Today’s smartphones are very useful when it comes to dealing with a crash. They allow you to photograph the scene of a crash, including the damage done to the vehicles, the final resting place of the vehicles, and other aspects such as skid-marks or debris left in the roadway. Most smartphones also have features that would allow you to videotape or otherwise record statements or conversations from witnesses. Finally, smartphones typically have “apps” which will allow you to either dictate or take notes of your own version of the crash, detail the weather conditions at the time of the crash, and obtain the specific coordinates of where the crash occurred if it happened on a road not heavily traveled. Know what features are available to you on your smartphone and use them to their full capabilities to help protect you.

In the Days/Weeks Following the Crash

Even in circumstances where you believe fault for the crash is clear, the insurance company for the other driver has a right to investigate and make its own determination regarding responsibility. The insurance company may very well have a copy of the crash report prepared by the police department. However, it often will still delay a determination regarding responsibility until it communicates with its insured.

If you have collision coverage on your own automobile policy you can at least proceed to get the damage to your vehicle taken care of. You will have to pay a deductible which your insurance company will then try and get from the insurance company for the at-fault driver. However, there are limits to what you can accomplish through your own insurance policy. If you do not specifically have rental coverage and the other driver’s insurance company denies responsibility, you will have no way to obtain a rental vehicle unless you pay for it out-of-pocket. If you do not carry medical payments coverage there will be no insurance proceeds from which to pay the medical bills which are incurred.

Even if you have medical payments coverage it may not be sufficient to pay all of the medical bills which could result from the crash. It is always preferable to have the insurance company for the at-fault driver accept responsibility so that all of the damages to your vehicle can be fixed, a rental vehicle provided if necessary, lost wages reimbursed, and your medical bills paid.

After a wreck, whether the other driver’s insurance company accepts responsibility or conducts an investigation to make its determination, you are likely to be contacted and asked to provide a statement. Be very careful in your communications with any insurance company – yours or theirs. Ultimately every insurance company is primarily concerned with protecting their money and they will deal with you accordingly. Insurance company representatives are notorious for taking an innocent statement and twisting it to benefit them while hurting your case. They will seek information that they can use to protect their interests, not yours. Because they are in the business of claims adjusting and you are not, any statements made by you can affect the entire case.

As a result, you should be very careful. If a crash report has been prepared and you have followed the recommendations above, the report should have all the information necessary to make a liability determination. Additionally, your medical records and bills should tell the insurance company all they need to know about your injuries.

For more information, check out our guide on what steps to take after a car accident with injuries.

Do I need to hire an attorney?

If responsibility for the crash has not been accepted and you were injured, then I would strongly encourage you to seek the assistance of an experienced personal injury attorney.  A good attorney can guide you through the entire process, including a lawsuit if necessary. Controlling the communication with the insurance companies and the flow of information to them is usually best left to an experienced attorney. An attorney may also know of necessary resources such as private investigators and accident reconstruction experts should it be necessary to further develop the facts of the case.

If responsibility for the crash is disputed you will likely need counsel to assist you with the case. It is better to do this sooner rather than later. Many emergency dispatch centers only keep tapes of 911 calls for a limited period of time. Because memories often fade and the physical characteristics of the scene of the crash can change, it is best to obtain statements and photographs as quickly as possible. There have even been cases where businesses close to the scene of the crash may have captured all of it or important parts of it on their video surveillance systems. Waiting too long to contact an attorney in a case where liability is disputed can prove fatal. Early investigations are often crucial to a case where the facts are being denied by the other driver.