Through Miley Legal’s efforts of negotiation and past experience with settling these types of claims, they garnered a total recovery of $60,000!

It was an early afternoon on September 15th, 2018. The skies were clear, and the sun was out. A woman, named Stacey, stopped her car at an intersection to make a left-hand turn. While at a halt, a woman, named Michelle, who was neglecting to pay attention and has been tailing Ms. Stacey, failed to apply her brakes in time. Michelle slammed her Kia Sorrento SUV in Ms. Stacey’s Chevy Cruise sedan!

The results of the collision were horrific as Ms. Stacey suffered injuries including a cervical strain with muscle spasm, neck pain, left shoulder pain, constant headaches, and fibromyalgia. Ms. Stacey’s neck and shoulder pain has worsened in days after the incident. In October, she went to a medical center, Gray Family Practice, in hopes to find a remedy to her aching body. They noticed tenderness all over her neck and shoulders, so Ms. Stacey was advised to undergo physical therapy. 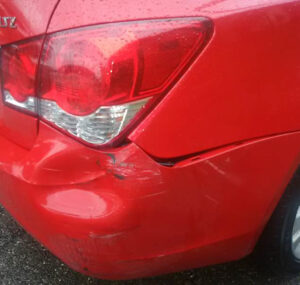 The doctor at Gray Family Practice also advised Ms. Stacey to have an MRI of her cervical spine, so she had one a month later, in November, at East Ohio Regional Hospital. The results of the MRI found central disc protrusion, which resulted in minimal effacement of the anterior thecal sac at C5-C6. Although Ms. Stacey has been in physical therapy for a couple of months, she was not seeing any progress. It was quite the contrary as she had a decreased range of motion in her neck and left shoulder, less strength, and decreased mobility.

By the end of November, more than 2 months after the accident, Ms. Stacey rated her pain level as an 8/10 as it worsened to the point, she could not even lift her grandchild. Months go on, and the pain lingers. By July of 2019, the next year, she saw a neurological surgeon who diagnosed her with chronic neck pain, whiplash injury to her neck, and headaches. Ms. Stacey also had dizziness in September 2019, more than a year after the accident! After deciding to have a checkup with Dr. Sakia, she was diagnosed with cervicalgia and fibromyalgia.

As January of 2020 rolled around, Ms. Stacey has seen some relief from therapy, but it was concluded that the relief was only temporary. On February 5th, 2020, Dr. Sakia diagnosed her cervical spondylosis, cervicalgia, and fibromyalgia. Later that month, Ms. Stacey received trigger point injections, and by March she reported 70% relief as a result of those injections. Although Ms. Stacey has reported a considerable level of pain relief, her reduced level of neck pain and headaches continue to this day.

Ms. Stacey’s various visits to the hospital, medical center, health center, and radiologist’s office has spawned costly medical bills with medical expenses totaling $15,499.22. In addition, future medical expenses will be incurred as it was noted that Ms. Stacey has yet to fully recover.

The Miley Legal Group tackled this case by communicating with Allstate Insurance Company. Through Miley Legal’s efforts of negotiation and past experience with settling these types of claims, they garnered a total recovery of $60,000! The Miley Legal Group is delighted to see another client go home with the compensation they deserve.