13 of the most common causes of motorcycle accidents are:

Motorcycles are high-risk motor vehicles. According to NHTSA (U.S. National Highway Traffic Safety Administration), motorcycles are more likely to be involved in accidents than cars. Bike crashes are 28 times as likely to be fatal as passenger car accidents.

Since motorcycle drivers have much less protection than other motorists, they must be especially careful to avoid hazards on the road. Preventing motorcycle accidents takes excellent coordination, smart planning, and good judgment.

By learning about the causes of motorcycle accidents and how to avoid them, it’s possible to keep both bikers and their passengers safe.

In 22.2% of motorcycle crashes, the critical event was a car making a left-hand turn. Car drivers fail to see the bike before making the turn because:

To avoid a left-hand turn accident, motorcyclists should:

While it’s not always possible to avoid left turns, drivers should consider minimizing their number when planning routes.

Almost 4,000 drivers and motorcycle operators die in fatal crashes that happen due to unsafe lane changes.

An unsafe lane change occurs when one motorist switches lanes and crashes into a vehicle that already occupies it. An accident can also occur when the motorist creates a dangerous situation for other road users while switching lanes.

To avoid accidents due to unsafe lane changes, all motorists should:

It’s imperative for both drivers and bikers to remember that motorcycles can be hard to notice during a lane change. 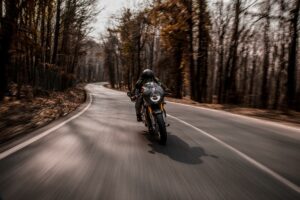 One of the most dangerous riding habits is speeding. By failing to adhere to the speed limit, a biker can’t react to a dangerous situation quick enough to prevent an accident. To make matters worse other drivers may have a tough time determining the motorcyclist’s speed which impacts their own reaction time.

While both motorcyclists and car drivers should stay within the speed limit to avoid accidents, the former need to pay special attention to this issue. A speed-related motorcycle wreck is likely to end in a fatality.

Numerous motorcycle accidents occur when a car driver or passenger opens a door without looking to see if the path is clear. As a result, the bike crashes into an open door.

A biker can sustain serious injuries including head trauma, broken bones, and severe lacerations. Open-door crashes can also be fatal.

To avoid common types of open-door (also called “dooring”) accidents, the vehicle driver and passengers should always look around before opening the door. Meanwhile, motorcyclists should try to steer clear of parked vehicles whenever possible.

Head-on collisions usually occur when one vehicle crosses over to an oncoming lane. They involve the front end of the motorcycle crashing into the front part of another vehicle. While only 2% of crashes are head-on collisions, they make up 10% of driving fatalities.

To avoid head-on collisions, bikers should try to:

To avoid hitting a motorcycle, car drivers should avoid distractions and follow the rules of the road.

6. Alcohol Use or Other DUI 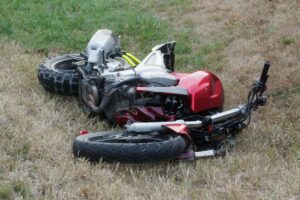 In the United States, alcohol-impaired drivers cause 29 fatal accidents per day. That’s one death per 50 minutes. Car drivers and passengers are more likely to survive a drunk-driving accident than motorcyclists (33% are killed).

Besides staying sober when driving a bike, it’s imperative to be aware of the situation on the road. Bikers must steer clear of other road users who exhibit suspicious behavior. It’s always better to slow down or choose another path than to become a victim of a motorcycle wreck.

Lane splitting is when a motorcycle tries to share a lane with another vehicle or drives between vehicles that occupy adjacent lanes. In the majority of the United States, lane splitting is against the law.

Since most motor vehicle drivers don’t expect a motorcycle to share a lane with them, they may make maneuvers that lead to accidents.

To avoid serious injuries, bikers should avoid lane splitting. Even if your state doesn’t have clear lane splitting guidelines (like West Virginia), it’s safer to keep such driving to a minimum. 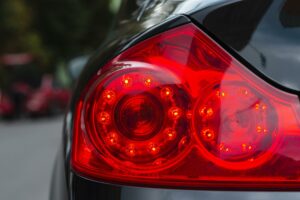 A sudden stop accident happens when the vehicle in front of you comes to a full stop so fast that you can’t react in time.

To avoid a rear-end collision, motorcyclists tend to swerve. Such actions cause them to skid, overturn, or hit other vehicles. These crashes often turn into chain reaction accidents, causing serious injuries and fatalities.

While it’s hard to avoid a sudden stop accident, to keep damage to a minimum, bikers can maintain a reasonable speed and a safe distance.

According to research, novice motorcycle riders with less than 2 years of experience have a higher accident involvement risk than experienced bikers.

Meanwhile, car drivers with little experience are less likely to notice motorcycles, estimate their speed, and avoid a collision.

To prevent accidents that involve inexperienced drivers, both bikers and car drivers should maintain a high level of awareness on the road.

Novice drivers must eliminate distractions, remain aware of all other vehicles sharing the road with them, and ensure a full understanding of the road rules. 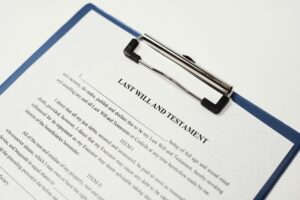 A poorly maintained road can cause serious motorcycle accidents. For example, hitting a pothole may lead to fatal injuries.

To avoid such accidents, a motorcycle rider should:

While it may be impossible to avoid dangerous road conditions altogether, you can minimize the accident damage by remaining aware of your surroundings and adjusting to them as needed.

About 40% of motorcycle crashes are single-vehicle accidents. One of the most frequent causes is a fixed object.

Hitting a fixed object such as a parked car or light pole can lead to substantial injuries for the rider. To avoid such accidents, it’s imperative to be aware of the situation on the road, maintain a reasonable speed, avoid distractions, and keep both hands on the handlebar.

The percentage of motorcycle accidents caused by a technical issue is low (less than 5%). These crashes are also the easiest to avoid.

The easiest way to avoid crashes caused by technical issues is to adhere to a timely maintenance schedule to check, tires, controls, chassis, oil, and electronics.

Depending on how often you use a motorcycle, you should service every 6 to 12 months.

Sport and supersport bikes are specifically optimized for speed, acceleration, braking, and cornering. These bikes accelerate quickly and can become hard to handle for inexperienced riders.

To keep them under control, high-performance motorcycle riders need to have high concentration and powerful forearm muscles.

The fatality rate of sportbike crashes is 2.5 times higher than that of standard motorcycles. For supersport bikes, it’s 4 times higher.

To avoid high-speed motorcycle accidents, it’s important not to exceed the speed limit. If you don’t have experience handling such a bike, avoid riding it on busy roads.

While it’s not always possible to avoid a motorcycle accident, both car drivers and bike riders can do their best to keep motorcycle fatalities rates down.

The best thing that anyone on the road, motorcyclists and auto drivers alike, can do is follow the rules of the road by staying within the speed limit, keeping a safe distance, checking out the oncoming lane, and using blinkers.

Even if just one of the two road users is attentive and experienced, it’s possible to avoid an accident or at least minimize the damage.

Thousands of motorcycle accidents happen in the United States every year. They end in fatalities or cause serious injuries to riders and their passengers.

For a free consultation to learn more about your rights and eligibility for compensation, please contact the motorcycle accident attorneys at The Miley Legal Group using the contact form on this page.