The oil and gas industry has provided many well-paying jobs for our area.  It has also allowed for many to earn money by leasing their sub-surface mineral rights or their land for pipelines to be constructed.  However, one unwanted thing the oil and gas industry has brought with it over the last several years is crashes involving large trucks. West Virginians have seen coal trucks traveling up and down our highways since we were born. Many tractors and trailers traveling from ports on the east coast make use of our highways to deliver materials to factories and products to stores.  However, the oil and gas industry has brought even more large trucks.  Whether trucks are hauling pipeline materials or rigging structures, or tanker trucks are hauling sand and water to and from the well sites, our roads are not the only thing being destroyed.  Many people are being seriously hurt or killed.

In our area alone the news is littered with stories of tragedy where people are severely injured or killed as a result of crashes involving these trucks.  Perhaps the worst example involved a water tanker overturning in March 2013, crushing two young children to death in Harrison County.  While that should have caused the industry to pause and contemplate ways in which these tragedies could be avoided, it did not.  Approximately two months later a mother and daughter were killed by a well water tanker in a neighboring county.

The risk of being killed by a large truck is not unique to North Central West Virginia.  Statistics released by the National Highway Traffic Safety Administration for 2013 show that there were almost 4,000 people killed and over 95,000 injured in crashes involving large trucks (those with a gross vehicle rate over 10,000 pounds).  The number of fatalities and injuries increased from 2012.  Between 2009 and 2013, the number of large trucks involved in fatal crashes has increased annually, all while the average number of miles traveled by these trucks had gone down. 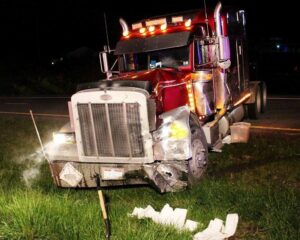 Common sense tells us that most deaths in crashes involving large trucks are not occupants of the large trucks themselves.  The Insurance Institute for Highway Safety analyzed data from the U.S. Department of Transportation for 2013 and found that almost 70-percent of the deaths from crashes involving large trucks were occupants of a passenger vehicle.  Approximately 15-percent of the deaths were pedestrians, bicyclists, or motorcyclists.  People traveling in smaller vehicles are simply more vulnerable than those traveling in the large trucks.  The trucks often outweigh the passenger cars by tens of thousands of pounds.  Because of the height of the trucks and their ground clearance, smaller vehicles often underride trucks when crashing into them.

So what causes these truck crashes?  It is often the result of bad choices on the part of the trucking companies and their drivers.

Trucking companies are typically corporations which make decisions concerning the day to day operations of their business with a focus on what earns more money.  Often times managers are hired and fired based on productivity goals.  As a result, truck maintenance is often overlooked.

If repairs are made properly, a highly skilled and properly trained mechanic has to be paid to do it.  Parts on the trucks which become old, worn out, and/or broken need replaced with new parts.  If a truck needs to be pulled out of service so that repairs can be made, that truck is not on the road earning money for the company.  All of this costs money and cuts into the profits to be made by the company.

Hiring the best qualified drivers also costs money many companies are unwilling to spend.  Instead, if a less qualified driver, with a questionable past driving record, can be hired for less, he or she often will be.  Additionally, many drivers work for several different companies in a short period of time.  Some of the companies are bought and sold within a several year period.  This high turnover rate regarding drivers and the companies they work for leads to an environment wherein it is difficult to check the background and references of a potential hire.  Often, simply having a commercial driver’s license is sufficient.  If we were hiring someone to drive us around, would we settle for someone simply because they had a license to drive or would we want to know how well they drove, how they did in past employment for others, and what their work ethic was like?  Why should we settle for different hiring practices by an industry that puts us all in danger every day we drive on our local highways?

Even the best drivers can also be overworked.  Sometimes the compensation is tied to productivity.  Other times the pay for the driver is so much better than what they might earn other places.  In either scenario, there is an incentive to work a lot of hours for the company and the driver.  This leads to driver fatigue, one of the leading causes of large truck crashes.  The rush to complete a delivery and get to the next one can also lead to the driver failing to conduct the vehicle inspections required by federal law.

Truck drivers are no different than those of us who drive automobiles.  In today’s world of cellular phones, truck drivers are also prone to distracted driving.  Additionally, the use of drugs and alcohol by a driver is no less unique to those operating automobiles.  Quite frankly the size and weight of these large trucks makes them more difficult to operate than an automobile.  It takes longer to brake, they are more difficult to steer and navigate turns, and a truck driver cannot see everything behind their vehicle.  Despite this, many truck drivers operate the trucks in the same manner many of us would an automobile and do not take into account these differences which makes it more difficult.  Driving a truck safely requires the driver to be much more anticipatory of potential hazards ahead of them.  They must react much sooner to avoid danger than drivers of automobiles.

What Can Be Done?

Federal laws and regulations have been enacted by our government to direct the operations of truck drivers and trucking companies, but they are not enough.  Additionally, many companies and drivers have either found ways around these rules and regulations or are willing to risk getting caught because the money made while violating the rules outweighs any penalties which might be faced if the violations are discovered.  As a result the current environment is ripe for tragedies to continue to occur on our roadways.  It is not a matter of “if” someone else will be killed by the large trucks servicing the oil and gas industry, it is simply a matter of “when”.

Stricter regulations regarding driver qualifications and truck maintenance must be enacted.  No matter how strict the rules are, if there is nobody to enforce them the rules will be violated.  As a result, more efforts at enforcement and inspection must occur.  More lives are lost annually to large truck crashes than those that were lost to the terrorist attacks of 9/11.  Following 9/11, the United States spent trillions of dollars, created a whole new federal agency, started two wars, and began a period of surveillance and oversight never before seen in our history.  If the same efforts were applied to large truck crashes, we could prevent the loss of thousands of lives every year.

Additionally, given the severity of harm caused when these trucks crash, more mandated minimum insurance coverage is necessary.  Currently the government requires only $750,000.00 in liability coverage.  However, would any of us accept $750,000.00 in exchange for the life of one of our loved ones?  Of course not.  This minimum amount must be raised substantially.

Finally, we all can do our part as well.  If we are aware of poor behavior from the trucking companies or the drivers, we must report it to the proper authorities.  We must also take the opportunity, if called upon to serve on a jury, to take seriously our roles in that manner.  Juries are the voice of our community regarding safety and what conduct will or will not be tolerated.  I am a firm believer that behavior does not change until the cost of staying the same is greater than the cost of changing.  Until the trucking companies are made to realize that risking the lives of West Virginians will cost a whole lot more than it will to run its operations in a safe manner, then we cannot expect the current climate to change, only worsen.